The hows and whys in hairdressing: When academic realities clash

Having told the story of me and one of my teachers discussing the first draft of my research proposal too often, it transformed into an in-joke among my fellow students and me. Shortly after the meeting, I couldn’t laugh about it at all. But with some time passing and controversies being solved, what stays is a funny memory that figures as follows.

My teacher – let’s call him Frank – and I were sitting next to each other on a blue sofa in the Anthropology Department at the University of Amsterdam. Frank had a busy schedule because I was not the only student eager to hear his recommendations for improving the first draft of my research proposal. He started our conversation with the words “An interesting research topic, indeed…”. This small word – indeed – turned into a big BUT in the course of our thirty-minute conversation. In order not to bore you with further details, the main image that stuck in my mind is this: Frank raising both his hand above the head, constantly waving them as to point me to something that I was out of inexplicable reasons unable to see, and repeating the question “But what does it mean?”. I, in contrast, firmly held my notebook with both hands, shaking it as to emphasize its material existence, while replying to his question with an emphatic “No, how is it done?!” 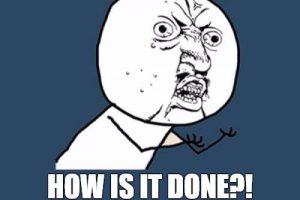 (Needless to say that these memes are exaggerated depictions)

This post serves a twofold purpose. On the one hand, I want to show how the above overdrawn controversy with Frank is an instructive example for hardened fronts between the why-front and the how-front in sociology and anthropology. On the other, I want to shortly review what has been done on the why-front with respect to hairdressing, in order to point out the benefits of attending to the hows with a material-semiotic approach.

Frank’s and my discussion did not just occur out of the blue. We were dwarfs having our difference of opinion on the shoulders of wise people. Here, I do not think that it is necessary to go back to the ancient Greek philosophy of Plato and Aristotle as this post’s cover picture might suggest. A comparatively small step back to the 1960s and 70s might suffice. For this time, Ortner (2016, 49) describes a clash between culturalists and materialists in anthropology. The former, led by Clifford Geertz, argued that culture guides people’s lives by providing them with meaning. Culture gives their why. Materialists such as Eric Wolf, in contrast, were concerned with the role of economic and political forces shaping people’s lives.

One word of clarification: the conflict between culturalists and materialists not really gets to the heart of the matter. Frank, with his emphasis on meaning, was arguing on Geertzian shoulders, of that I’m sure. But on which shoulders was I standing? Was it on ethnomethodology’s? Symbolic interactionism’s? To be honest, I’m not 100 percent sure. Law (2009) tells several origin stories of material-semiotics. Among these origins he names Latour’s laboratory studies and Serres’s philosophical considerations regarding (dis)order and translation. But he also sees in material-semiotics an “empirical version of poststructuralism” (Law 2009, 145). So, maybe I wasn’t standing on a firm pair of shoulders, but – quite characteristic for this approach – on shifting grounds.

Material-semiotics explicitly pays attention to materialities – for instance of a notebook vehemently shaken by a student during a discussion with his teacher. It asks how these materialities come to matter (in both meanings of the word) in different and changing webs of relations. Contrary to Ortner, Law (2009) opens new lines of division. This division between humanist sociologists and material-semiotics runs along the ontological distinctions of human and nonhuman, big and small scales, and the social and the technical. While humanist sociologists maintain these distinction, material-semiotics erodes them: humans and things, big issues and seemingly small trivialities, and cyborgs all come together in situated practices and specific constellations. Why distinguish in the first place then, if they are only relational effects?

My above depicted difference of opinion with Frank resembles Law’s description of this clash between humanist sociologists and those doing material-semiotics. He distinguishes between the former “who frame the social in terms of meaning and intersubjectivity” and material-semiotics which attends to “the material practices that generate the social” (Law 2009, 147–48). Against jumping to conclusions about social forces behind phenomena, he insists that “it simply isn’t possible to explore the social without at the same time studying the hows of relational materiality” (Law 2009, 147–48). In line with this argumentation, Mol proposes a “praxiographic shift”: instead of unquestioningly assuming certain entities and forces to exist, we should study their hows. In Mol’s case, this translates into “studying bodies and diseases while they are being enacted in daily hospital practices” (Mol 2002, 83).

The whys and hows in taste

Maybe the clash of academic realities I try to describe becomes clearer with a concrete example: taste. Most people trained in the social sciences associate taste with the name of Pierre Bourdieu who argued that the food we prefer to eat, the clothes we like to wear and the music we regard as beautiful – in short, our tastes – are shaped by our social position in society, i.e. the education we received, the social circles in which we grew up and the financial resources at hand to afford a certain lifestyle. In sum: social forces determine our tastes.

Hennion, instead, takes another stance. Tastes, he argues, neither are static properties of objects nor do tastes have fixed objects such as cigars or operas. Therefore, he attends to attachments – the active work people put into making themselves attached to objects (Hennion 2007, 97–98). As a result, he turns away from critical sociology which aims at wegerklären of tastes. This German verb literally translates as “explaining away” and describes the process of making something absent by explaining its mechanism and ways of working meticulously. Instead of explaining away tastes as socially determined, Hennion proposes following the collective activities people apply to make themselves sensitized. He attends to the process of how “the body that tastes and the taste of the object” (Hennion 2007, 112) co-emerge in specific moments. By conceptualizing taste as a situated activity, Hennion fights on the how-front against critical sociologists and their concern with an underlying, invisible why of tastes.

What does it mean?

So, what does it mean, when people chose a certain hairstyle? Some social scientists provided interesting answers to this question. They conceptualize the hairdressing salon as a space in which specific identities are being forged through certain styles. Gimlin (1996) shows how women in a hairdressing salon in Long Island, New York use hair to express their “inner self” and to enact a specific notion of femininity that suits their professional, upper-class lifestyle. Reid (2013) takes us to South African towns and describes how gays carve out a socially accepted position as style experts. Majors (2004) conceptualizes the African American hairdressing salon in the Midwest of the US as a speech community that provides a safe environment for its customers.

See? Through style and styling, communities are bound together and identities are performed. The social positions of a gay man in rural South Africa, of an upper-class woman in Long Island or of a black person in the Midwest influence which salon they chose to produce which style. So far so good. But how is it done?

How is it done?

I follow Law in arguing that rather than “explain away” styling by some social forces such as sexuality, class or race, we should first attend to material practices that generate the social. Mol does it by asking how the body becomes multiple in different practices of diagnosing and treating atherosclerosis. Hennion (2007) also does it by attending to how music amateurs learn to appreciate and be affected by music or how climber and rock shape each other mutually in the action of climbing.

Similarly, I do not want to leave the materiality of hair and material practices of styling hair unattended in my research. Hair texture may resist forming attempts or it may require much work to maintain a specific style. The hairdressing salon not only points us to the question of the meaning of hair and style for different people. It bears also the how-question: How is style produced – which techniques, tools, and products are necessary for it? How does a styled body emerge in the hairdressing salon?

Let me end this post with some words directed at Frank: even though discussing a proposal from quite different theoretical standpoints meant some emotional stress for both of us, I would like to thank you. By insisting on the meaning aspect of my research, you not only pointed me to the weak spots of my proposal, but also forced me to underpin my theoretical approach.

Reid, Graeme. 2013. How to be a real gay: Gay identities in small-town South Africa. Scottsville: University of KwaZulu-Natal Press.